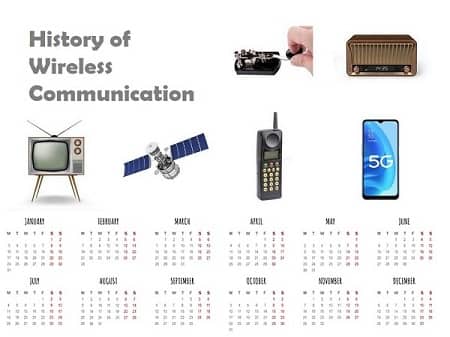 The history of wireless communications starts in the 19th century with the theoretical prediction of electromagnetic waves by James Clark Maxwell in the 1860s. Two decades later, it was experimentally proved by Heinrich Hertz in 1888.

The first form of communication started after the invention of the Morse code by Samuel F B Morse in the 1830s. It uses different signal lengths to encode characters known as “dot” and “dash” (with dot – shorter and dash – longer duration of signals). This encoded message will be sent via a wired medium and will be interpreted at the receiving end by a person simply by listening to the sequence received.

The limitations of wired channels for long-distance communication lead us to continue experiments on wireless medium for information interchange. It eventually trigger engineers and inventors to develop an efficient way of communication using wireless technology.

The first wireless telegraph system was invented by Italian engineer Guglielmo Marconi in 1896. He demonstrated a newly developed device by sending radio signals across the Atlantic Ocean and received it successfully.

Marconi improved his telegraph further and holds 800 wireless patents. Later this technology has proved its significance in the history of events. SOS signals from the sinking Titanic was received by nearby ships and 700 peoples were rescued. It was the most efficient form of distress signal during that period of time.

Marconi’s invention was accepted by many radio enthusiasts and many people started to develop a different variants of radio transmission devices across the USA and Europe during the early 20th century. In December 1906, a Canadian radio experimenter send music and talks for one hour, and people were able to listen using their wireless receivers. This was the first radio broadcast.

In the UK, the first commercial radio broadcast began on 15th June 1920 with Australian opera singer Dame Nellie Melba’s song on the radio.

The first commercial radio started broadcasting on November 2, 1920, by station KDKA (Westinghouse Electric and Manufacturing Company in Pittsburgh) in Pittsburgh, Pennsylvania, United States. The day has significance in US history, people could hear the presidential election results before they read them in the newspaper.

In Asia, the first radio broadcast started in Srilanka (formerly known as Ceylon) as Radio Ceylon in 1923. Radio started operation across other Asian countries like India in June 1923, central Asia – the Soviet Union in November 1924, and Japan in 1923.

Radar development began in the 1930s, with the work of several scientists in several countries. The first experimental radar system was built in England in 1935. German scientists also developed radar during World War II, and the technology was used extensively by all sides during the conflict. After the war, radar continued to be developed for both civilian and military applications.

In the 1950s, radar systems were developed for use in air traffic control and weather forecasting. Today, radar is used in a wide variety of applications, including aircraft navigation, missile guidance, and law enforcement.

The first commercial television broadcasting started in the US on July 2, 1928. They have used 1605 kHz and 6420 kHz frequencies in the beginning and later at 2.0 to 2.1 MHz range.

Non- experimental TV broadcasted started in Germany in 1935 and one year later in England by British Broadcasting Corporation (BBC).

The modulation technique used in the earlier generation of the radio broadcast was Amplitude Modulation. The quality of the sound was poor and greatly influenced by interference and atmospheric conditions like weather. As radio was the only form of entertainment medium for millions of people, better technology was introduced with improved sound quality.

The new technique used Frequency Modulation (FM) and was thus later known as FM radio stations. In simple words, FM is a technique of changing the frequency of the carrier signal according to the amplitude of the sound signal.

The first fully licensed commercial FM station started broadcasting on March 1st, 1941 from Nashville, Tennessee in the US. In the UK, FM broadcasting started after a decade by BBC on 2 May 1955.

The first-ever artificial satellite was Sputnik 1, launched by Russia (then known as the Soviet Union) in 1957. This historic event marked the start of the “Space Race” between the Soviet Union and the United States. Since then, satellites have become an essential part of our lives. They are used for a wide variety of purposes, including communications, weather forecasting, and navigation. The development of satellites has played a pivotal role in the exploration of space and the advancement of science and technology.

The first generation of satellites was used primarily for communications and television. They were large and bulky, and could only stay in orbit for a limited amount of time.

The first cellular phone was developed in 1973 by Dr. Martin Cooper of Motorola. The first call was made on a prototype Motorola handset on April 3, 1973.

GPS, or the Global Positioning System, is a space-based navigation system that provides precise location and time information to users on the ground. The first GPS was launched in 1978, and it revolutionized navigation for both civilian and military users. Since then, GPS has become an indispensable tool for everything from getting directions to your next destination to tracking the movements of assets and personnel.

GPS is also used in a variety of applications such as surveying, mapping, and timing. The original GPS consisted of 24 satellites in orbit around the Earth. These satellites transmit signals that allow GPS receivers to calculate their precise location. GPS receivers can be handheld, vehicle-mounted, or even built into smartphones.

GPS has become so ubiquitous that it’s hard to imagine life without it. It’s hard to believe that the first GPS was launched just over 40 years ago.

The first generation (1G) of mobile networks was an analog technology that was launched in the 1980s. This first–generation mobile network was very slow by today’s standards, with data speeds of only a few kilobits per second (kbps). Despite its slower data speeds, 1G was a breakthrough at the time because it allowed people to make phone calls and text messages from almost anywhere.

The second-generation (2G) of mobile networks was a digital technology that launched in the early 1990s. 2G increased data speeds to a few hundred kbps and also introduced new features such as text messaging.

The fourth-generation (4G) of mobile networks was a digital technology that launched in the 2010s. 4G increased data speeds to a few tens of Mbps and introduced new features such as high-definition (HD) video streaming.

The advent of the internet has led to several technological advancements, one of which is Wi-Fi. The first generation of wireless standards (IEEE 802.11) was finalized in 1997 and released in the same year. Wi-Fi allows devices to connect to the internet wirelessly, using radio waves.

This technology has become popular since its first release, as it eliminates the need for cables and makes internet access more convenient. Wi-Fi is considered one of the most popular and widely used technology across the world.

The latest generation of Wi-Fi networks is capable of providing Gigabits per second speed with lower latency and high security.

The second generation of satellites was smaller and more lightweight, allowing them to stay in orbit for longer periods. They were also equipped with more powerful cameras and sensors, which expanded their capabilities to include things like mapping and weather monitoring.

The third-generation (3G) of mobile networks was also a digital technology that launched in the early 2000s. 3G increased data speeds to a few megabits per second (Mbps) and introduced new features such as mobile broadband Internet access.

The 5G – the fifth-generation mobile networks are the latest generation of wireless technology which revolutionized the way we use our mobile devices. The first 5G networks were deployed in 2019 and it is still in progress across the globe.

5G networks are faster, more efficient, and more secure than their predecessors, and they will open up a whole new world of possibilities for mobile users.

5G networks will be built using a combination of technologies, including small cell towers, massive MIMO, and beamforming. These technologies will work together to create a robust and reliable network that can handle the massive amount of data that will be generated by 5G devices.

Read more about Evolution of Wireless technologies – 1G to 5G

The third generation of satellites is even smaller and more advanced, with some of them being the size of a shoebox. They are equipped with even more powerful cameras and sensors and can stay in orbit for years at a time. These satellites are used for a variety of tasks, including communications, navigation, and Earth observation.

The fourth generation of satellites, which are currently being developed, will be even smaller and more advanced. They will be equipped with artificial intelligence and other cutting-edge technology and will be able to perform a wide range of tasks. The development of satellites has come a long way since the first generation, and there is no doubt that future generations will be even more advanced.

Wireless technology has been continuously evolving ever since the first communication using Morse code, now at 5G a century later. Researchers are currently studying the possibilities of 6G technology for future wireless networks. Analysts predict that the early implementation of 6G technology will be ready by the year 2030.

Future Wi-Fi networks will be capable of providing data rates up to 10 Gigabits per second (or higher) with lower latency of single-digit milliseconds.

We have witnessed the technological advancement of the wireless network to support increasing demands to accommodate billions of devices without compromising the quality of service and security. Complex modulation schemes and MIMO technology will further enhance our existing networks to support the ever-increasing demand for an efficient network.