You are here: Home / Wireless / Top Wireless Technology Trends in 2022 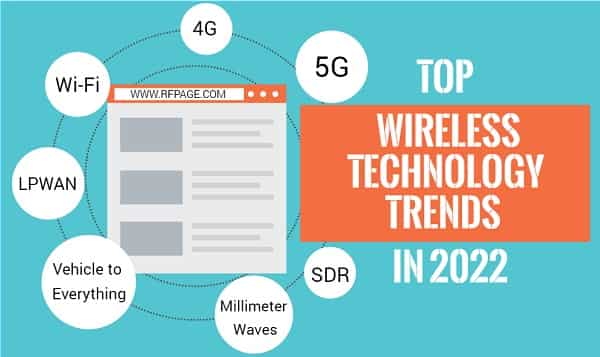 4G offers many benefits over previous generations of mobile networks. It provides much higher data rates, allowing users to enjoy a better experience when streaming video or downloading files. 4G also has improved performance in terms of latency, meaning that there is less delay when sending or receiving data.

Two key technologies enable 4G speeds: LTE (Long Term Evolution) and WiMAX (Worldwide Interoperability for Microwave Access). LTE is the most widely used 4G technology, with many mobile operators around the world now offering LTE services. WiMAX is also used in some 4G networks, although it is not as widely deployed as LTE.

As of March 2022, the 4G network is widely available in most countries. There are a few countries, such as Japan and South Korea, where 5G is available, but 4G is still the most widely used network.

In Asia, 4G is available in most major countries except for a few rural areas in counties like India and Pakistan.

Find the 3G/4G/5G coverage map of any country/region.

5G is the fifth generation of wireless technology, and it is expected to bring a major change to the mobile landscape. The technology is still in its early stages, but it is already beginning to be deployed in some countries. Here is a look at the 5G network status across the globe as of April 2022.

The United States is one of the leading countries in the deployment of 5G technology. All four major carriers in the country (Verizon, AT&T, T-Mobile, and Sprint) have launched 5G services in all major cities and markets.

South Korea is another country that is ahead in the 5G race. All three major carriers in the country (SK Telecom, KT, and LG Uplus) have launched 5G services.

According to a report by Opensignal, the global average 5G download speed is 250Mbps as of March 2022.

The next generation of Wi-Fi is well on its way, with the first 802.11ax Wi-Fi 6 products already hitting the market. But what’s the status of Wi-Fi 6 adoption around the world?

The technology is seen as a positive step forward in terms of speed and efficiency and is expected to improve the overall internet experience for users. In terms of countries, the United States, United Kingdom, and Canada are among the leaders in terms of Wi-Fi6 adoption, with many other countries following suit.

In Asia, China has been a major driver of Wi-Fi 6 adoption, with the country’s Ministry of Industry and Information Technology (MIIT) approving the use of Wi-Fi 6 in unlicensed spectrum back in December 2018.

Japan is another country that has been quick to embrace Wi-Fi 6, with the country’s regulator approving the use of Wi-Fi 6 in unlicensed spectrum in March 2019. So far, we’ve seen good progress on the Wi-Fi 6 front, with many countries around the world giving the technology the green light for use.

The Wi-Fi7 status as of March 2022 is that the 802.11n standard has been finalized and is being implemented by manufacturers. The new standard offers increased speeds and range over the previous 802.11g standard. The 802.11ac standard is also in development and is expected to offer even higher speeds and range.

For example, it could be used to help people find available Wi-Fi networks in their area. It could also be used to help businesses understand how their customers are using Wi-Fi, and to troubleshoot Wi-Fi problems.

The benefits of this technology are manifold. For example, Wi-Fi sensing could be used to automatically turn lights off when there’s no one in the room or to trigger an alarm when a person or object enters a restricted area. The possibilities are endless, and the technology is still in its early stages of development.

One potential issue with Wi-Fi sensing is privacy. The technology can be used to track the movements of people and objects, which raises concerns about how this data will be used and who will have access to it.

A millimeter-wave is a type of electromagnetic radiation with a wavelength in the millimeter range. They are also sometimes referred to as terahertz waves. Millimeter waves have a wide range of applications, including communications, radar, and imaging.

One of the most promising applications for millimeter waves is in the area of 5G wireless communications. 5G is the latest generation of wireless technology that is expected to provide significantly faster speeds and lower latency than current 4G networks. Millimeter waves are well-suited for 5G applications due to their large bandwidth and ability to penetrate obstacles (not good as microwave spectrum).

So far, millimeter waves are safe for human exposure. However, more research is needed to confirm this and to determine any potential long-term effects of exposure.

One of the key benefits of LPWANs is that they can significantly extend the battery life of devices that are connected to them. This is because LPWANs use very little power to send and receive data, which means that devices can remain in standby mode for longer periods of time.

LPWANs are also well suited to applications where data needs to be transmitted over long distances, as they can cover much larger areas than other types of wireless networks. One of the most popular LPWAN technologies is LoRa, which is used in several IoT applications.

The other two significant LPWAN technologies are ZigBee and Z-Wave.

Vehicle to Everything (V2X)

Vehicle to vehicle technology (V2V) is a system that allows vehicles to communicate with each other to avoid collisions. V2V uses short-range wireless communications to exchange data about a vehicle’s speed, location, and direction. The data is then used by the vehicle’s computer to calculate the risk of a collision and take appropriate evasive action.

V2V is still in the early stages of development, but the potential benefits are significant. By avoiding collisions, V2V has the potential to save lives, reduce traffic congestion, and improve fuel efficiency.

A vehicle-to-everything (V2X) system is a wireless communication system that allows vehicles to communicate with each other, as well as with infrastructure and other devices. The system is designed to improve road safety and efficiency by reducing traffic congestion and accidents. V2X systems use dedicated short-range communications (DSRC) to exchange data such as speed, location, and direction. The data is then used to improve traffic flow and safety.

A software-defined radio (SDR) is a wireless device that can receive and transmit radio signals using software instead of hardware. This enables it to be reconfigured to support different standards and frequencies, making it a versatile tool for radio enthusiasts and experimenters.

SDR technology has been around for many years, the new trend shows that SDR can be utilized for complex applications and replace expensive hardware chips with sophisticated software algorithms.

SDRs are becoming increasingly popular as the technology matures and hardware costs fall. They offer several advantages over traditional hardware radios, including the ability to be easily upgraded and extended with new features.

One of the key benefits of SDR is the flexibility it offers in terms of compatibility. By definition, an SDR can operate with any wireless standard. This means that it can be used with legacy systems as well as the latest technologies.

Another advantage is that SDRs can be reconfigured to support different modulation schemes and frequencies. This makes them ideal for use in situations where the radio environment is constantly changing, such as emergency services or disaster relief operations.

Finally, SDRs offer a high degree of integration. This allows them to be built into devices such as laptops and smartphones, where they can take advantage of these devices’ processing power and storage capacity.