Network analyzers are electronic instruments used to measure the characteristics of electrical networks, such as impedance, AC voltage and current, and distortion. RF network analyzers can be used for a variety of applications, such as characterizing filters, amplifiers, and impedance matching networks; measuring noise figure and gain; and troubleshooting RF circuits. Find out some basics of Vector Network Analyzer.

Vector network analyzers are used in a variety of applications, including antenna testing, filter design, and microwave circuit design. They can also be used to troubleshoot problems in an electrical network.

A scalar network analyzer is a piece of equipment used to measure the magnitude and phase of a signal at a single point in time. This type of equipment is used in a variety of industries, including telecommunications, aerospace, and defense.

A scalar network analyzer can be used to measure a variety of signals, including RF signals, microwave signals, and audio signals.

Network analyzers and spectrum analyzers are both types of electronic test equipment used to measure various characteristics of electrical signals. However, there are some key differences between these two types of equipment.

Spectrum analyzers can also be used to detect and measure interference in a signal.

What are the components of a Network Analyzer?

The combination of the mixer and the detector allows the RF network analyzer to measure the gain, loss, and phase shift of the device or system under test.

The magnitude and phase of the output signal can be measured and plotted as a function of frequency. The computer calculates the impedance and transmission parameters and displays them on the screen.

What are the parameters measured using network analyzers

Network analyzers are used to measure a variety of electrical properties of network devices and circuits. The most common parameters are insertion loss, return loss and SWR. Moreover, the matching impedance of each port can be analyzed with Smith Chart or VSWR format in modern network analyzers. 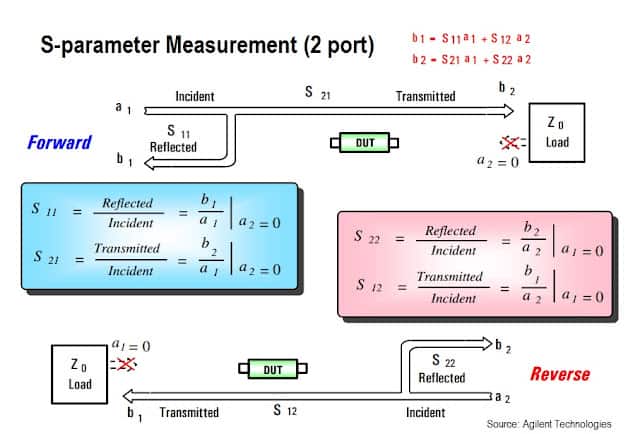 Networks analyzers are devices used to measure the performance of a communication network by injecting a signal into one end of the network and measuring the signal at the other end. Insertion loss is the loss of signal power that occurs as the signal travels through the network.

This loss is caused by the resistance of the wires in the network, the mismatch of the impedance of the wires, and the loss of power in the signal due to radiation and absorption. The insertion loss can be measured in decibels (dB)

RL is usually measured at a frequency where the transmission line is operating in the linear region. The return loss at other frequencies may be different. The return loss also depends on the impedance of the line.

There are several factors that can affect the return loss: the type of connector, the type of load, the impedance of the line, and the frequency of the signal.

The voltage standing wave ratio (VSWR) is a measure of the impedance matching of a load to a source. It is the ratio of the maximum voltage amplitude to the minimum voltage amplitude at any point along the line. The higher the VSWR, the worse the match. Impedance mismatch can cause reflections, which can lead to signal distortion and loss.

The VSWR is measured in a network analyzer by generating a sine wave signal and measuring the voltage at various points along the line. The maximum and minimum amplitudes are then compared to calculate the VSWR.

The impedance in a Smith chart of a network analyzer is a measure of the resistance and reactance of a circuit. It is represented by the symbol “Z” on the chart. The impedance can be calculated by using the following equation:

Where “R” is the resistance and “X” is the reactance.

A large signal VNA is a specialized type of VNA, designed to measure the performance of high power devices, such as power amplifiers and power converters. A large signal VNA can handle signals with peak power levels up to several hundred watts.

The advantage of using a large signal VNA is that it can provide a more accurate measurement of the device’s performance, under actual operating conditions. The input and output signals of a device, under test, can be very different from the signals that are measured in a laboratory environment. A large signal VNA can compensate for these differences, providing a more accurate measurement.

Modern multiport Network Analyzers use automated calibration units that simplify the calibration procedure with the help of software support.

When calibrating a vector network analyzer (VNA), it is important to use a calibrated test device to ensure accurate measurements. The calibration procedure varies depending on the type of VNA but typically involves matching the VNA’s response to a known standard.

The calibration procedure for a time-domain or frequency-domain VNA typically involves sweeping the device through its measurement range and comparing the results to a known standard. The VNA is typically calibrated at several points throughout its range, and the results are averaged to produce a calibration curve.

What is a VNA electronics-notes